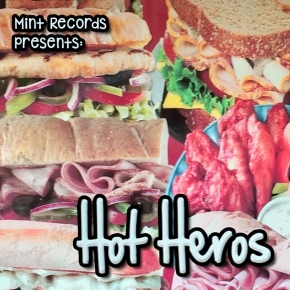 Inspired by the distinctive floating sandwich artwork of the Big Apple’s bodegas, the desire to create an updated version of the old timey sampler and our grumbling stomachs (it was almost lunchtime), we asked our current Minties—who call Vancouver, Halifax, and anywhere in between home—to share their favourite songs with us. After that, they nominated their friends to contribute tracks. Together they make up the first cassette Mint Records has released since Pansy Division’s Wish I’d Taken Pictures in 1996!

With plenty of flavours from across the country to choose, we let our roster be the tastemakers and picked up some savoury sounds in the process from Tough Age, Renny Wilson, Monomyth, Jay Arner, Kellarissa, Pick A Piper, and more! Many of these songs are previously unreleased and all are delicious! Photographed and coordinated by our transcontinental label manager, Shena Yoshida, and mastered by our very own Jay Arner, Hot Heros is a sonic smorgasbord for your aural appetite.

Although you will be able to stream the digital version of this compilation, only 300 physical copies of these little hotcakes will be manufactured. The first 50 people through the door can pick one up as a free gift at this year’s Ridiculously Early Xmas Party. So, fire up your Sony Sportsman on Saturday, November 29 and head down to the Electric Owl (928 Main St, Vancouver), but be sure to get there early as these will vanish fast!

Now, in case the album art didn’t get your earbuds salivating, you’re probably wondering what these bands are all about!

Renny Wilson – Sometimes mistaken for a slap-dash showman at first sight, this funny-man-gone-disco-gone-punk is about as versatile a performer and talented a engineer/producer as you can find. “Youngsters”, off this year’s Punk Explosion cassette, is no exception.

Other Jesus – Vancouver newcomers comprised of three music vets, Sheik Hardy, Jose & Maria, and Auntie Christ, the full frontal satire of O.J. is neither orange nor juice. Before appearing on Hot Heros, “Couch” was previously released on the sweet, sweet, lo-fi mess of 2014’s Bachelors of Art cassette.

Old & Weird – Halifax is a long ways away from Vancouver, and we don’t get there very often, but thankfully our pals Monomyth introduced us to their pals Old & Weird. Taken from this summer’s What I Saw cassette, “Peachy Beach” delivers exactly what it promises: an irresistible pop ditty that will have you singing along in the sunshine.

Tough Age – Wait. What’s going on here? A previously unreleased version of Tough Age playing cub’s “My Chinchilla”? A Mint band covering another Mint band? Greg Sage was right: there is no generation gap, at least between these two.

Heaven For Real – Warbly experimental pop from a couple of our favourite brothers on the East Coast, Mark and Scott Grundy, “Hard Done By” could hardly be done better by anyone else.

Monomyth – I have no idea what the title “Faces Magazine” is getting at but I really wish I did since everything this Halifax quartet touches to turns to gold, and sometimes even real money. This jam is so new, even the Mint staff haven’t heard it yet but I’m just going to go ahead and say it’s brilliant.

Creaks – Very little is known about Edmonton dream-pop outfit Creaks. They are elusive. They are timeless. They are not here. We do know that Renny Wilson helped record and produce this song.

Pick A Piper – When he’s not performing in Caribou’s live act, Brad Weber makes some pretty great dance music of his own. When we first heard it, we were shocked to discover “Fluency” was an outtake from Pick A Piper’s 2013’s self-titled Mint debut. Good thing it made it onto this comp!

Jay Arner – Does this man really need an explanation? If you’ve heard of Mint Records, you’ve probably come across this genius of pop songcrafting in some way or another. If you haven’t, this is a great place to start since he mastered every track on Hot Heros. Thanks, Jay!

Cult Babies – The first time I ever heard Cult Babies was at a little hole-in-the-wall sushi joint in Vancouver and so the fact that this previously unreleased track called “On A Roll” made it onto this comp only adds to my theory that Hasan is a wizard or possibly a secret agent. Also, if you’re planning on opening a restaurant, make sure there’s miso fries on the menu. They’re delish.

Energy Slime – Another gem from the Vancouver micro-pop outfit fronted by Jay Arner and Jessica Delisle, “After Tonight (It Will Never Be Night)” continues on the short and spacey trail of this year’s New Dimensional, which, if you haven’t heard, you probably should.

Watermelon – The slowly oozing lo-fi goodness of “Silver Surfer” from this Vancouver trio sticks in your mind the same way that a comic book character riding a surf board across the stratosphere does: with pure toes-on-the-nose chilllllll. Surf's up!

Supermoon – Previously known as Movieland, this power-pop band has been at it for a while now and definitely deserves the landslide of praise they’ve been getting. “Burnout of my Dreams” is the first recording to be released under their Supermoon moniker, but you will probably recognize their sound from the Movieland track on Mint/CITR Pop Alliance, Vol. 3.

Weird Candle – As their name implies, the dark ambient synth project from Vancouverites Kilroy Katerwol and Caleb Blagdon is an odd and dimly lit one. We still love it though.

Kellarissa – Larissa Loyva (aka Kellarissa) has been on the road a lot recently, singing in front of stadium crowds and making new friends around the world as a backup singer/keyboard player in How To Dress Well’s touring band. She can also be seen in her other project, Fake Tears. “Ships in the Night”, features Larissa's soaring voice and is a synthy, previously unreleased dream.