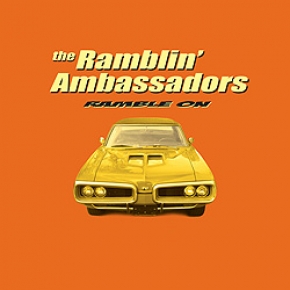 Ramble On, The Ramblin' Ambassadors' third album for Mint Records proves again that the Canadian West is the true home of instrumental rock and roll. Serving up another platter of big beat, no bullshit guitar instrumentals, the boys from Calgary kick up way more turf than surf. Ever spend too much time at the Brazilian Barbecue? One hot dog too many? Then check out "Meat Sweats", a greasy homage to that pulled pork you just washed down with a shot of cheap booze. "Back Seat Action" clearly conjures up borrowing Mom's land yacht for the big date, and every electric note of "Dallas B. Goode" counts the odometer clicks on your '56 Buick or maybe even your '73 Pacer. Cars ("Superbee") parties ("Clambake!"), and even the environmental activism of the forest-scorching "Pine Beetle Express" define what occupies the rock and roll minds of The Ramblin' Ambassadors.

Ramble On was recorded entirely in the band's secret underground bunker, under the tutelage of musical whiz-kid Russell Broom. This album strips the Ambassadors' sound even further back, with pretty much a single track for each instrument. (Well, the drums are in stereo, so that's a couple.) Ramble On has the fiery twin guitar attack of Brent J. Cooper and Gentleman Doug Waite that we have grown familiar with, and listeners will notice that Brent J. occupies one side of the stereo spectrum and Gentleman Doug the other. Scott Nickless rides the yellow line, keeping his big bass right up the middle, and Tyler Pickering's able drumming puts the tyger in the tank. Ramble On follows the traditions of the Ambassadors' two previous Mint records, slamming home the fact that they remain, according to Exclaim! Magazine, "one of the best instrumental acts around today."

An excellent choice for fans of Huevos Rancheros, Southern Culture on the Skids, Reverend Horton Heat, The Sadies, or Los Straitjackets.