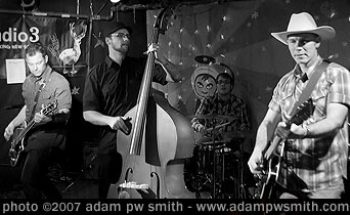 The Ramblin' Ambassadors were formed on a dare by Huevos Rancheros' guitarist Brent J. Cooper. Tired of hearing Cooper gripe about not playing enough, a local booking agent calls his bluff: "I need a band for next week" can you get one together?"

"Uh, sure," replies Coop. "We'll be called the Ramblin' Ambassadors."

Within three days, Brent J. lands Scott Nickless, former Agriculture Club bassist, and writes a half dozen songs. A co-worker of Brent's volunteers his roommate to fill in on drums. Voila! A quick practice and off to the show!

The Ramblin' Ambassadors -- not "Bastards" (why? Being a fan of CBC morning radio, Cooper couldn't imagine CBC hostess Shelagh Rodgers saying "and that was the Ramblin' BASTARDS") -- are soon sharing stages with the Calgary punk-rockers The Von Zippers, Supersuckers, and Big Sandy and His Fly-Rite Boys. Still without a permanent drummer, the band relies on help from Chixdiggit's David Alcock. A chance meeting occurs with pizza deliverist/drummer Tyler Pickering and the lineup is complete.

Within a couple of months, the band starts recording in their secret-location rehearsal complex. Unhappy pushing "record" with his toe while playing guitar and giving orders, Cooper enlists the recording expertise of David Alcock. Opting for a stripped down sound, Dave's studio is reduced from twenty-four tracks to twelve, ensuring a minimum of studio trickery and a maximum of budgetary compliance.

Although comparisons to Huevos Rancheros are inevitable, the Ambassadors draw on more than just Cooper's rock and roll instrumental primitivisms. Mariachi trumpet, sleigh bell percussion, and loopy, Theremin-sounding toy keyboards pop up on the recording.

The band's debut Avanti features local celebrities David Alcock, Russell Broom (Jann Arden's right-hand man), R&B favourites the Mocking Shadow's Ian Hartley, and world-famous saxophonist Michael Ibrahim (on organ!!). The list of notorious, almost made it to the studio to help out luminaries is longer than the Ambassadors' set list! (Wait for the next one.) Also, a song from Atomic 7/ Shadowy Men guitarist Brian Connelly ("Twenty Original Fembots") is featured (perhaps high jacked is more appropriate.)

Still on their steady rock 'n' roll swagger, the Ambassadors released their third album Ramble On in 2012 via Mint.

Visit the band by clicking here!