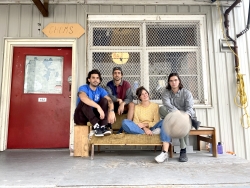 Pre-orders for Pray 4 Tomorrow are now available on Bandcamp and the Mint web store. Out November 11, 2022.

This project is funded in part by FACTOR, the Government of Canada and Canada’s private radio broadcasters.