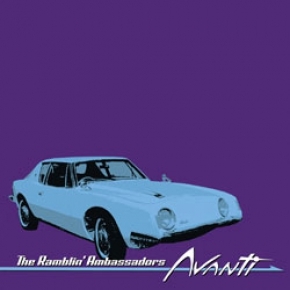 ... sweaty, anthemic, surf tunes with influences as vast as the Alberta landscape worn proudly on their flannel sleeves, be it old-time traditionalists like Ennio Morricone, Dick Dale, and The Ventures, or the new breed of surf/punks, fellow Canucks, Shadowy Men on a Shadowy Planet or Los Straitjackets... Can I get a "Wahoo?" Can I get a "Yee Ha?" Like, "Cowabunga, dude!" Grab your best gal and pull on your lizard-leather boots and get out there on the dance floor. - Fake Jazz

Nine entirely instrumental tracks plow through visions of rejuvenated live crowds, touching on Ennio Morricone and Dick Dale in all their lighthearted danceability. The spirit of fun has the memory of past charm in its crosshairs, hoping those same happy Canucks haven't forgotten their fun-loving mission. This is music to pop in at your next party - perhaps more appropriately if it's a theme party - but it will no doubt get the herd moving. - Lost At Sea

Like Huevos Rancheros, the Ambassadors utilize a very Southern-influenced approach to their songs, but they also add a bit more surf (Ventures, Chantays) to the mix. The songs are actually very catchy and immensely listenable, remarkably 'cool' and worthy of a nice, big audience of surf-hooked hipsters... It doesn't matter if you like instrumental rock or not, you gotta love Avanti. - Indieville

If you have never had the pleasure of hearing what exactly it is that Coop can do to a guitar then you need to run and find Avanti at your local record store. This is some of most adventurous music along the theme of a Spaghetti Western soundtrack ever. Some of the tracks clip along nicely and make you wish you had a car like the Ambassador and then there are songs like "The Hairless Cat" that make you miss your mommy. Avanti is a venture down a path that is rarely taken this day and age, a path that is instrumental guitar rock. Brent Cooper is one of Canada's finest guitar players and Avanti showcases those skills very nicely. - Music Emissions

The guitar work is, of course, outstanding to say the least. Great modern instrumentals. This one's a keeper. - Baby Sue