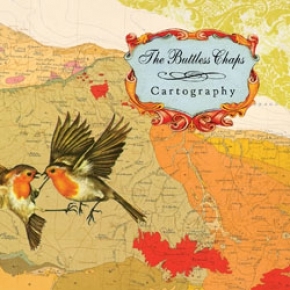 One hell of a new album... The gorgeous artwork accentuates the excellent album to a T. Both are exploratory things of beauty, well worth the investment of your time. - Monday Magazine

This is a band at its peak and Cartography is a work of art. - Discorder Magazine

It's an album that makes you close your eyes and listen, which is always a good sign. - Edmonton Sun

Gowans ability to pen a sci-fi ballads and rural anthems (and tracks like "Coal Grey Sky" will satisfy any classic Chaps fan), but with beautiful harmonies, static electro currents and terrific percussion the Chaps are able to replicate lonely nights in dark cities (the energy that crackles throughout the desolate title track is incredible). - HeroHill

Blending folk-country with a bit of atmospheric new wave sentimentality, Cartography takes you on a soft, dream-like journey that you won't want to wake up from. - Discorder

Sombre country rock underpins world-weary vocals, and while the guitars may twang, the effect is closer to a musical meditation than a whiskey-soaked hoedown. This basic foundation allows for some interesting side trips -- such as the vocoder-filled gravitas of The Opera, which wouldn't sound out of place on an Air album-- while still providing an ideal soundtrack for a late-autumn solitary trek through fallen leaves. Suitable for a cool, Canadian October. - The National Post

From the dead-souls darkwave of "Broken Transit, Broken Soil" to the campfire twang of "Water by the Wayside", the group's latest album, Cartography, maps out terrain where others would fear to tread. It's a good indication that, 10 years into their career, the Chaps are just getting started. - Georgia Straight

What with GPS gizmos and Internet pathfinders, the art of cartography is probably now archaic. And yet, with its latest release, British Columbia's the Buttless Chaps sounds nothing like dated. Cartography is panoramic and often futuristic, expansive in its arrangements and lyrical imagery. The band and leader Dave Gowans specialize in juxtaposing old sounds with new wave. The title track updates Doorsian psychedelia with a spacier direction, and a funny thing happens on the way to The Opera, a sublime track with a classic piano motif and a robotic vocoder. Water by the Wayside forebodes gently; Cool Grey Sky has a folk-rock strum. If it sounds like the Chaps are all over the map, that just isn't the case. Rather, its course is absolutely chosen. - The Globe and Mail