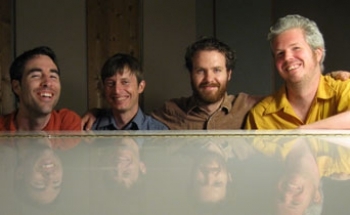 Since their inception in 1998, The Buttless Chaps played for audiences across the continent and created six studio albums. Demonstrating increased breadth and artistry with every release, the band placed absolutely no limits on their musical wanderings. The result was an imaginative and seamless journey from traditional country to new wave to punk, performed without irony or pretense.

In preparation for the band’s earlier releases, much time was spent in a small studio tucked away in the pine beetle infested forests of northern British Columbia. Their sixth release, Cartography was the first since their self-titled debut to be written exclusively in the city, but the seeds remained that conjured up those feelings of a yearning for visual expansiveness.

Joining the band for that album was drummer Dan Gaucher (Fond Of Tigers, Rabnett 5). His spontaneus energy and creativity is apparent throughout the recording, bringing the band together with a more aggressive sound on such tracks as “Coal Grey Sky”. Ida Nilsen (vocals, keyboards) rounded out the cast of long time regulars, along side Morgan McDonald (Keyboards) Lasse Lutick (electric guitars) and Dave Gowans (Lead Vocals, Guitar and Banjo). Special guest Tim Vesely of Rheostatics fame also made an appearance on several tracks.

The Buttless Chaps celebrated their tenth anniversary as a band in April of 2008 with a concert recorded and broadcast nationally in Canada on CBC Concerts on Demand. Sadly, in January of 2009, Dave Gowans announced on CBC Radio 3 that the band would be dissolving following their remaining tour dates in order to focus on other projects. Morgan McDonald went back to Fond of Tigers and Ida Nilsen to Great Aunt Ida and The Violet Archers, while Dave Gowans reformed Cloudsplitter.