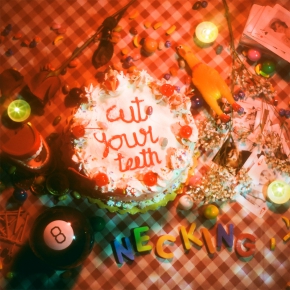 Necking became a band before playing a note of music together. The origin story of the Vancouver-based powerhouse post-punk quartet starts at a party where all four members met for the first time and began boasting untruths about their group’s musical accomplishments. Following a series of fake names including Britney Bitch and Four White Guys, they picked up instruments for real, quickly earning a rep for their live wire performances and no-holds-barred humour. This continues on the band’s debut LP, Cut Your Teeth, a collection of songs about dating woes, cybersex, and self-improvement. Ultimately focused on the friendship shared by the women of Necking, their main motivation is making themselves laugh.

Like all the best punk bands, Necking’s members draw inspiration from outside of genre-defined boundaries, with tastes spanning everything from ’90s emo to grunge, disco, and drone. One band they can all agree on is X-Ray Spex, whose singer Poly Styrene channeled her day-to-day life into Day Glo songs of resistance. On their signature 1978 song “Oh Bondage! Up Yours!”, she flips the bird to anyone who thinks “little girls should be seen and not heard.”

Necking carry on this tradition with fearlessly personal, occasionally painful, and empowering lyrics based on their own experiences. On “Big Mouth,” Karren proclaims, “can’t make me cum/so I made you leave,” before adding, “it was way hotter in your memory.” On the sarcasm-dripping “Boss,” her gaze turns to “the man in charge of her livelihood” who can “get it,” while the feverish “Habbo Hotel” flashes back to their formative A/S/L experiences.

With three of the band’s four members experiencing break-ups during the writing of the album, the shouted vocal rounds of “Rover” share Kuipers’ shame over crawling back to a boyfriend who treated her like a dog, before triumphantly regaining her own identity after dumping him on “Still Exist.” R’s bass lines snake around Kuipers’ stutter-step drumming on “No Play Time,” the band’s strongest showcase of their neck-whipping rhythms, before colliding into Hayek’s fuzzed-out riffs on “Drag Me Out.” Most practical of all, the buzzing intensity of the one-minute quick-hitter “Go Getter” rattles off life tips from drinking less to wearing earplugs.

“These songs are all about personal growth,” Kuipers concludes. “‘Go Getter’ is a tongue in cheek thing, but the lyrics are things we’re trying to focus on so we can be good, healthy people. ‘Drag Me Out’ is about being alone and feeling like a nobody until someone drags you out and you feel like yourself. The album’s overarching theme is starting from scratch and learning how to be a person in the world again, thanks to the help of your best friends.”