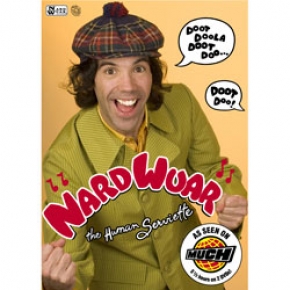 "Oh my God! It's Nardwuar! Nardwuar, the Human Serviette! Don't you know who Nardwuar is? He's the biggest freak in the whole of Canada! He's like this insane, insane guy. He's out of his f*cking tree! I hate him! He did this interview with me on the phone once. He knows everything about everybody! He wangled his way backstage to Nirvana, and he was up in everyone's face. He's crazy, but you'd love him. I can't explain why!" - Courtney Love

If you don't know who MuchMusic's Nardwuar the Human Serviette is by now, this 2 DVD set will certainly leave you with the odour of the world's greatest interviewer in your eyeballs. Hailing from Vancouver, BC, Nardwuar the Human Serviette has made a name for himself by interviewing everyone. From former Soviet leader Mikhail Gorbachev to Snoop Doggy Dogg to your mother, Nardwuar has tackled them all! Now it's his turn to share his interview conquests with you, the jaded consumer. On this massive 2 DVD set prepare to sit back and watch Nardwuar struggle, squirm, smile, and f*ck up, (just wanted to see if y'all were still reading; there are no f*ck ups on this DVD!) his first two MuchMusic Specials, the aptly titled "Nard Wars I" and "Nard Wars II". See below for the entire tracklisting.

Look at the what the people are saying! You will want more! That is why we have included 2 DVDs! Furthermore, oh no, "Nardwuar Sings!" Yes, as lead screamer of The Evaporators (who themselves contain members of the New Pornographers), the "Nard" has put forth his own musical vision, and your're gunna get some of that too on the DVD! He's hairy, he smells, he sings, he's unique, he's annoying, he's insightful, he¹s relentlessly probing. And who else could bring together Destiny's Child, Wesley Willis, and Jean Chretien on the same DVD? Nardwuar the Human Serviette! Keep on rawkin' in the free world and Doot Doola Doot Doo ... Doot Doo!