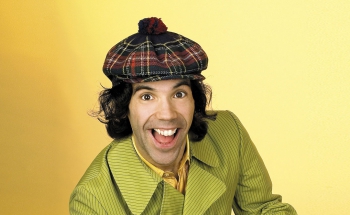 Who is Nardwuar you ask?

I have always remembered the first moment I met Nardwuar the Human Serviette. I was a cub reporter for Vancouver's once-notorious Georgia Straight newspaper, writing a column about local music called Undercurrents. He got in touch with me to attend a concert he was presenting. Otherwise, there's no way I would've ended up at the lounge of the Arts Club Theatre on Seymour Street (at the time, a frequent Vancouver punk and alternative venue) for an early-starting all-ages show. Think about it. No booze. Probably no women past the age of legal consent for sexual encounters. Not much motivation to attend something that. And it was on a Sunday, so it might conflict with my holy duties down at the church.

But, reconstructing things as they must have happened, some guy I'd barely heard of (he'd just started a radio show on UBC's CiTR Radio) sent me a note inviting me to the show. I'm sure he was persuasive. That sort of sounds like him. He called himself Nardwuar and the show was the "50th Annual Amelia Earhart's Christmas Party," featuring five bands. I know the name would've intrigued me (Earhart, not Nardwuar). It's not like it is today, with the kids and their search engines and instant downloads. To know who Amelia Earhart was you'd have to have read some books, or picked up on all the pop-cultural waves she generated after her disappearance in one historical media form or another. It's an intelligent choice, but pretty obscure. If you're looking for a shocking, outrageous choice of a celebrity to put on gig poster, it wouldn't be her. You'd pick "Ronald Reagan's Head on a Pike," "Jimmy Stewart's Sexcapades," or "Judy Garland Eats Rats," instead.

So, I went. The actual memory I have left has become kind of abstract. It's more of a strong sensory impression than it's the sort of thing I could testify to in court. Picture a blur of motion and someone's face BURSTING out in front of you, trying to talk about eighteen things at once in twelve seconds. Wow. So this is Nardwuar, huh?

He was dressed in a Santa suit (it was a Christmas party, he wasn't just being wierd) and setting out bowls of potato chips when I met him. At the time I wrote that he, "put me in mind of the first time I saw my younger brother drunk-annoying and endearing at the same time. But Nardwuar wasn't drunk, just very intense, yet likable."

And, really, that's always the way I've felt about him ever since. Except, really, the annoying part drops away pretty quickly. It's not so much annoyance, it turns out, as discontinuity. Think of gears moving at different speeds. There's a bump when they meet, and they either mesh or instantly ricochet off each other, spewing teeth. When you meet him, he's going at his speed and you're at yours. Then the clutch pops and, well, different people react differently. The second time, you have a better idea of what to expect.

But, when I met him the first time, I remember a moment of "Wha, huh?" and then I was right there with him, nodding, agreeing, interjecting, suggesting, asking questions and hearing his reasons for choosing the bands he was presenting that day. His energy and passion is so strong you either retreat from it or get caught up. And, where's the fun in avoiding somebody who's so lively and enthused?

So, I suppose I go back practically to the beginning of Nardwuar. He tells me that the Earhart show review was his first real mainstream media coverage, and I later did a short item in Vancouver magazine. But all I did was talk to him and try to describe him accurately without falling onto cheap cliches. I can take no credit (or blame) for "breaking" Nardwuar. He already had a radio show and his own style. And despite all the energy he burns off in simple enthusiasm, he's had plenty left to start his own record label, promote lots more all-ages concerts (including Mudhoney, the Posies, even an astounding Fugazi show that drew 2,000 people), scramble his way onto TV (first with Vancouver's legendary Soundproof, then, of course, on MuchMusic), perform in bands, interview other bands for Chart, Razorcake, Roctober and Flipside magazines, jam-pack a Web site and create a DVD with more than five hours of material (which still only represents a fraction of his efforts-just look through this website and you'll know I speak the truth. Doesn't he ever sleep?).

And these are all things he accomplished himself. Not alone-he's the first to acknowledge the assistance of his friends in all those efforts (Team Nardwuar, perhaps?). But none of it would've happened without Nardwuar's drive to get it done. I really respect that. I mean, who among us has started a record label? I still don't know how you'd go about doing that, but he managed it as a teen (I remember him telling me the first album was funded with savings from a newspaper delivery route). And, instead of fuming about the lack of all-ages shows, he started presenting them himself. He's still good for one every year or so.

So, he's a big lover of music, a champion of the most obscure bands, and a real supporter of local talent as well. Plus, he's built a modest media empire through sheer willpower and hard work. All very commendable. But I recognize that's not how most people know Nardwuar. They know his on-air personality, particularly as it comes across when he interviews people.

The personality first. Is it real? Well, yes. To a point. I mean, we are all aware that he's actually someone else, that he wasn't named Nardwuar the Human Serviette at birth. Simply steal his wallet and check his driver's licence if you don't believe me. I even know what that real name is, but I'll do him a favour and not mention it. When you work in media, it's nice to have a bit of a buffer between yourself and those you might piss off. I've also heard the story of how the Nardwuar name came about, but I'll do you a favour and not pass it on. It's kind of dull. Goofy and yet tedious. If you ever get the chance to ask Nardwuar a question, pick another topic. It's a real eye-glazer. Nuff said.

Besides, hearing where the name came from does nothing to educate you as to the man himself. If he called himself Bob Smith, he'd be the same unique guy. Wasn't it Shakespeare who said, "A Nardwuar by any other name would still be one strange cat"? Perhaps not. I didn't go to a very good college. That is, I was enrolled in a very good college, but I just didn't go.

But according to the Psychology 101 textbook I have handy from those days (at least the part not eaten away by rats), the use of an alternate identity-the Nardwuar name-is probably a manifestation of the need to protect one's ego while venturing into a public role. But that doesn't mean Nardwuar is a put-on character. There is a difference between the guy when he's on-air and when he's not, but it's not a night-and-day difference. More like a 1 pm/3 pm thing. He definitely emphasizes some aspects of himself when the spotlight's on, but it's still the same guy. Essentially, he's just letting himself go wild, in a way only children usually get to do.

It's important to know that, because people sometimes think he's one of those high-concept comedians who's only out to confuse and embarrass celebrities. Actually, those are the part of his work I know the least, even though they're probably the main reason he's known outside Vancouver. Sometimes I find it a little too visceral to watch, read, or listen to those particular interviews, when someone (particularly a cushioned, comfy celebrity) reacts badly to the Nardwuar Experience.

Usually I associate moments like that with a malicious intent, a kind of sneak attack. But Nardwuar is such a sweet and genuine person (and effusively polite, as well) that I know he doesn't deliberately provoke such encounters. As an experienced media person I'm sure he recognizes when he's getting good tape from someone, but I do believe he'd be even happier if the celebrity had gotten onboard and done a real interview. Some do, some don't. Famous people usually live in an insulated existence, so having this guy bounce up to you acting all zany is probably a bit of a shock. And maybe Nardwuar sometimes seeks out the faded B-listers-former sitcom stars and their ilk-knowing the odds are better than even that the reaction he'll get is confrontational, but then again, that's a lot more interesting than the usual fawning idiotic celebrity coverage we're already soaking in. Nardwuar's a kind of litmus test for the personality lurking behind the capped-teeth smile. Nardwuar's smart and savvy, so I'm sure he knows what he's doing.

Oddly, I do really enjoy Nardwuar's political interviews. Usually, though, they're the shortest. He is generally escorted out fairly quickly after asking the first question. It must be odd, preparing to ask a question that you know will get you evicted, but there's also a real surreal beauty in asking Mikhail Gorbachev which world leader has the biggest pants, or in prompting Prime Minister of Canada to state that pepper is something he puts on his plate. I think I would chicken out. That takes real nerve.

Anyway, have a good time with all the interesting interviews and other content on this website. You'll laugh, you'll gasp, you'll cringe. It's only part of Nardwuar's prodigious output during his relentless media career, but it's a good sampling. Enjoy.

Dave Watson
Nardwuar fan since 1987.
Will work for Jaguar parts.