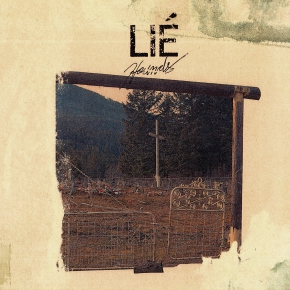 The LP is limited to 300 copies pressed on translucent red vinyl!

Hey, we know it's a long way from the cuddle-core and alt-country of Mint's roots but you know what? We love some really vicious punk. Some really grim and dark punk. lié scratches those itches raw and reminds you of everything you should still be angry about. Mint recently re-issued lié's debut album, Consent, on cassette after it lingered out of print for several years. Their follow up album, Truth or Consequences, on Austin, TX based art-punk label Monofonus Press led to extensive touring. After playing at every "ask a punk" venue across North America, lié flew down to Austin to record with Ian Rundell (Spray Paint, The Rebel, etc). The resulting record, Hounds, is cold, hostile, and most of all dark. Mint and Monofonus have teamed up to co-release the new album and we will be offering it on exclusive red vinyl, available only in Canada!