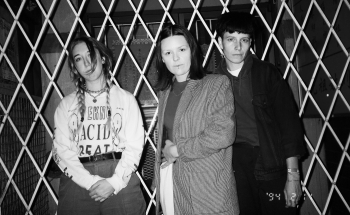 You Want It Real, the band’s fourth album, expands on previous themes with an assured intensity and plenty of world-weary lyrics. Sonically, lié’s recordings have unleashed the full-bore wall of sound that’s present in their live shows. That’s due in part to the work of legendary punk producer Jesse Gander (White Lung, Japandroids), who has helped unlock a further disharmony of melody and feedback in the band’s relentless aggression.

"It’s not an easy listen, but that’s the point. It’s filled with anger and violence, like so many women’s lives, and that’s why bands like Lié are essential." – The Georgia Straight

“a battering ram through the barred door of rape culture, abuse, and male privilege.” – KEXP

Digging in the Desert

You Want It Real - Album…
Design by Brodie Kaman
Download