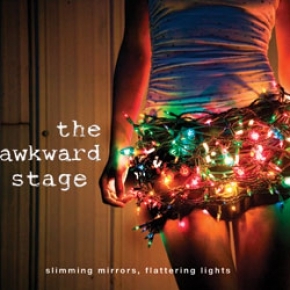 In the cluttered musical climate of the late aughts, The Awkward Stage’s sophomore record, Slimming Mirrors, Flattering Lights was an audiophile’s oasis where the band successfully combined clever lyrics and courageous arrangements into 12 brilliant and brutally honest pop gems. And it still is.

Slimming Mirrors, Flattering Lights is a refreshing record, a fragile yet triumphant record that possesses a rare cohesive beauty. The Awkward Stage began as the recording project of multiinstrumentalist, Shane Nelken, who many will remember as one of Carl Newman’s henchmen in The AC Newman Band, or from CBC Radio 3’s “Dear Shane”, where he acted as their witty resident rocktologist and advice guru to the stars. The Awkward Stage also features Tygh Runyan (The Beans) on lead guitar, percussionist Tony Koelwyn (Bossanova), and Chris Mitchell (of the Vancouver Symphony) on trumpet. Tygh is also an accomplished actor and can be spotted in Snakes on a Plane. Seriously!

Following their 2006 Mint Records debut Heaven Is for Easy Girls, The Awkward Stage toured North America extensively with The New Pornographers, played with ‘60s legends The Zombies, performed at the CMJ Music Marathon as well as SXSW, and were nominated for a Western Canadian Music Award for their pop wizardry. With the addition of more personal and reflective elements, Slimming Mirrors, Flattering Lights not only retains, but improves upon, the infectious pop genius of Heaven Is for Easy Girls. So take notice — there’s no sophomore slump here.

The Awkward Stage demonstrates that they have a firm command of many distinct flavors of clever and well-crafted pop music, and can make them come to life in the studio with consummate craft and no small degree of enthusiasm. - AllMusic