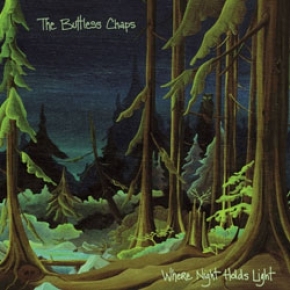 The Buttless Chaps were at the top of their game when they released Where Night Holds Light, their sixth studio album, and second for Mint. Their unique fusion of alt-country and new wave achieved graceful perfection in 2006 as the vocal duets between Ida Nilsen (Great Aunt Ida) and Dave Gowans gorgeously harmonize over guitarist Lasse Lutick, keyboardist Morgan McDonald, and drummer Torben Wilson throughout the album. They merged majestically as a momentarily sable quintet, graciously absorbing a little extra help from the likes of Jesse Gander (Hive Creative Labs), J.P. Carter (Fond Of Tigers), and two members of The Rheostatics.

The desolate, yet full instrumentation pairs with the downplayed male and female vocal delivery in a certain crushed but surviving way that I've only seen in the likes of Young & Sexy, the Rheostatics, and other such Twitch City/Made In Canada types... it's bands like this that make me proud to be Canadian. - Tiny Mix Tapes

With Where Night Holds Light, the Buttless Chaps continue their musical evolution from offbeat alt-country to more expansive, yet still offbeat, orchestral pop. Their music projects an open, pastoral quality that is forged by both acoustic and electric instrumentation. One of the band's intriguing aspects is how twangy and rock elements coexist with all of the synthesized whirls and blips. Nothing the Chaps do is straightforward. Their songs are stuffed with a variety of musical ideas, time signatures, and melodies... Full of beauty, the music on Where Night Holds Light holds an unsettling undercurrent that seems part of the band's design. A beguiling, if not quite totally successful, musical adventure. - allmusic

The Buttless Chaps... created some of the most inventive music to come out of Canada, an independent band in every sense of the word.  They’re just as willing to put bluegrass banjo in a song as they are to put new wave synths, even making a habit of putting both of them in the same song.  Rather than let such an approach trap them into a rut of new wave country, however, they’ve always used the approach as an open door, a way to let their silliest ideas come to fruition in ways both musically exciting and strangely catchy—no small feat when the lyrics are as literate and intelligently constructed as the Chaps. - PopMatters

Layered with banjo, piano, horns, jangly guitars, accordion, autoharp, and rolling vocals, this is a splendid, velvety addition to the Buttless Chaps’ expanding oeuvre... The time to avail oneself of the Where Night Holds Light is at or around hour two of a road trip. The novelty’s worn off. The excitement of ditching the city bleeds into an introspective deference to the passage of time. This album fills that gap in space and time. Buy it and get out of town. - Vue Weekly

On Where Night Holds Light, The Buttless Chaps continue honing their sound into something so specific and special that it makes you wonder why synth-pop and alt.country ever tried to be two different genres in the first place. Whatever this sound is, it's warm and rich, and The Chaps are only getting better at it. - Chart Magazine