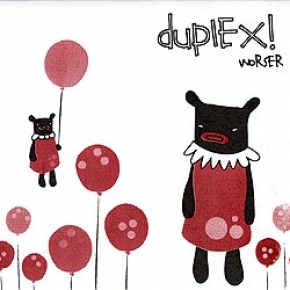 Continuing along on their mission to deliver indie-rock to the small people, Vancouver’s Duplex! returned with Worser in 2009, their second full length album and highly anticipated sequel to their debut Ablum, released on Mint Records four years earlier.

Recorded at the once hippest studio in town The Hive (R.I.P.) and featuring a silkscreen cardboard cover designed by Annie, Worser was digitally released via Mint on October 13th and sold in hard copy at shows and through vedahille.com.

Kids and parents rocking out and learning about noble gases, orange popsicles, and a little sister’s love for her big brother? You couldn't ask for anything else from a record.

...this album is pretty adorable and the players on the album (Veda Hille, Geoff Berner, members of No Kids and AC Newman to name a few) do an excellent job of putting together simple songs that will do a good job of bridging the gap between Raffi and the New Pornographers for young listeners. - Jordie Yow, Discorder