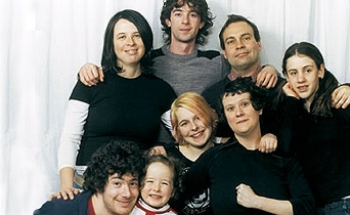 Just because you want to make music that kids can enjoy doesn't mean you have to play down to them. You can simply play with them! After all, kids are people too.

That is the kind of thinking that brought about Duplex!, the Vancouver based absurdo-indie collective. Seemingly out of the blue, an all star team of sensitive but lighthearted musicians with their fingers on the pulse of the community realized the overwhelming public need for a band, if only a single album, to provide a soundtrack for the (possibly loooong) road trips to the summer cottage that would satisfy both children and adults in equal measure. From this desire, and without label support, Duplex! was born, and recorded their debut album, Ablum.

Here's how it all happened: Canadian cultural icon and Duplex! member Veda Hille sent a copy of the record to Mint. Featuring a plethora of local music giants mingling with preteen musicians, it quickly ended up in the hands of Mint's youngest A&R Rep, three year old Sam Baker. Suffice to say that somewhere between chants about salad tasting like dirt, ska-flavoured ditties about chromosomes, and the eminently singable "Pooing & Peeing," the album quickly found a permanent place in the car CD player and the Mint office ghetto-blaster.

We've always believed that you gotta go with your gut here at Mint, and to see a three year old take instantly to this like a duckling to a puddle was all the gut we needed. Frantic phone calls were made, papers were signed, and Ablum was released to critical and parental acclaim on May 3rd, 2005.

2009 saw the highly anticipated release of Duplex!'s sophomore album Worser. Thematically, the album grew up just a little, including topics such as evolution, noble gases, sandwich making, photosynthesis, same-sex divorce, and dogs in sweaters. And in minivans on backwood roads across North America, there was much rejoicing.

"Duplex make rad kid-oriented music about happy things like house pets and times tables. It's little more than a novelty, but a completely worthy and high-quality novelty, and I'd definitely play this for the hipper kids in my life." - Now, Toronto