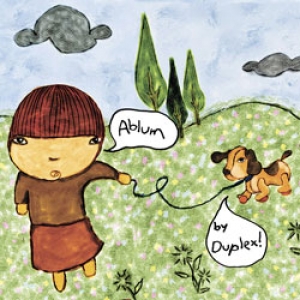 So begins Ablum by Duplex!, the debut CD release from Vancouver, BC's pre-teen sensation, not surprisingly called Duplex!. We should come clean right off the bat: they're not all pre-teens, but some of them are really really pre. Like as in a three year old, an eleven year old, a twelve year old, and a hodge podge of their parents. We should also mention that this is a kids' record first and foremost. But like all great children's music, this record offers lots of good times for the adults too!

An enormously fun, whip-smart kids' album, recorded by people who all live under the same duplex roof in Vancouver (hence the name), it's the product of the kind of healthy, creative home environment that not enough kids live in. This CD is an absolute joy. - PopMatters

Composing children's music is tricky stuff. It's hard enough to come up with a song that kids will like, but you also have to make sure it won't drive their parents bats. The Vancouver band Duplex! solves this problem by bridging the generation gap... and the results are sweet, daffy, and utterly charming. - Slate