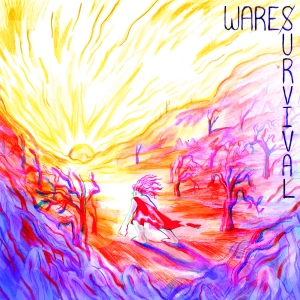 Few albums combine raw vulnerability with shredding solos as seamlessly as Wares’ Survival. On her first release for Mint Records, Edmonton’s Cassia Hardy blazes through riff-wielding indie-rock symphonies for anyone striving to stay alive and create a brighter future. By sharing her own journey towards hope, she hopes to light a path for anyone lost in the dark. As Hardy explains in its liner notes, “this record is dedicated to decolonial activists, anti-fascist agitators, and prairie queers fighting for community and a better life.”

Previous Wares releases have flickered with a slow burn, yet Survival lights the fuse from ominous to explosive in its first 60 seconds. This change in mood can be credited in part to the past year of touring across Canada with the stalwart live band of keyboardist Jamie McLean, bassist Matthew Gooding, and drummer Holly Greaves, who also perform throughout the album. Their arrangements are meticulous, while Hardy’s production alongside engineers Mason Pixel and Jesse Gander (Japandroids, White Lung, Woolworm) refine these songs into crystalline clarity.

The passion in Hardy’s voice is unmistakable, as it becomes clear these songs are literally about life and death. The feverish riffs of “Hands, Skin” opens the album with her account of an assault, before the elegantly swaying sound of “Tall Girl” describes Hardy’s isolation from a kindred spirit in its powerfully plainspoken refrain: “I regret not getting to know you better.”

By the end of its first side, “Surrender into Waiting Arms” finds the singer gaining enough confidence to open herself up to the world in a triumphant power pop anthem.Yet by side two’s “Complete Control” she has returned to a withdrawn state in the hopes that someone can drag her out, culminating in one of the album’s most powerful organ-drenched passages. “There are ups and downs,” Hardy explains. “It’s not like ‘I went to therapy and now I’m 100% great.’”

In a society that turns its back or attacks those not recognized as one of their own, outsiders are forced to band together. This desire for connection is reinforced in Hardy’s lyrical references to human bodies: “undisciplined” or “hardened” skin, tense muscles, aching shoulders, and unwashed clothes run bringing listeners into vivid intimacy. “The songs on this album are really personal to my journey,” she concludes. “The worlds inside it are about carving out an identity and learning acceptance so you can join a community for a better world. Finding people and opening your heart to companionship, love, and vulnerability is the real deal. I just want to reach people wherever I can.”

"By coming clean with her own struggles over the course of the record, Hardy shows that even the most formidable obstacles are surmountable. She’s alive; now it’s your turn." - Pitchfork