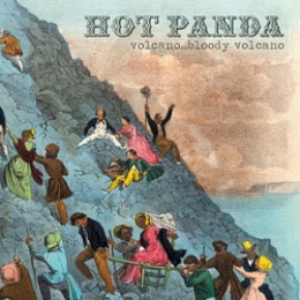 180 gram vinyl comes with full lyrics, digital download, and a fun looking poster. Also available as (digipak) CD or digitally through iTunes. Shipping the LP to an American address? Order your copy through Midheaven! Hailing from Edmonton, Alberta, Hot Panda formed during the particularly chilly winter of 2006. Chris Connelly (Vocals, Guitar) and Maghan Campbell (Drums, Vocals, Glockenspeil) returned home from living overseas in Oslo, Norway and were inspired by the vibrant Norwegian music scene they left behind. Joined by Keith Olsen (Bass, Vocals) and Mike Robertson (Guitar, Vocals), they recorded their debut EP Whale Headed Girl. Heath Parsons (Keyboards, Guitar, Accordian) joined the lineup and the band started to receive some local press attention, appearing on the cover of Vue Magazine before getting voted the third best band in Edmonton by See Magazine. The Hot Panda debut Volcano... Bloody Volcano was recorded in Winnipeg, MB at MidOcean by Ryan McVeigh (Boats! Intercontinental Champion) and released by Mint on February 10th, 2009.  It is a collection of collaborative songs chock-full of the band's spastic energy reminiscent of Clap Your Hands Say Yeah, State Bird and older Flaming Lips (think "Tangerine") with flashes of An Albatross thrown in for good measure. Soon after its release, comparisons to luminaries such as Daniel Johnston and The Talking Heads began swirling about. And while it is always nice to be compared to such bands, Hot Panda certainly found their own sound this time around. Leaving behind the frozen garage jam sessions in which their musical explorations began, Hot Panda won new friends and fans as they took the album's unique blend of brit-pop, glam, and lo-fi indie back and forth across the expansiveness of Canada and the USA, stopping at festivals like CMJ and PopMontreal along the way. Undiscovered Canuck indie rock at its best, with amazing collective vocals, jaunty keyboards and blazing guitar. This band weren't just good, they were frickin' great. Hot Panda are of next big thing pedigree. - Chart Attack It’s not often a band manages to balance big risks with the immediate rewards of hook after hook (especially on their first full length), but Hot Panda seems to know exactly when to add new layers and when to rely on the riff that grab your attention. - herohill.com