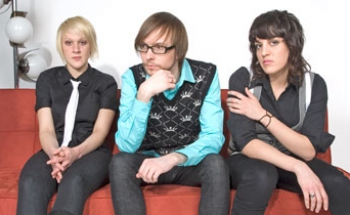 Bella's career path rose quickly, forming in 2003 and recording their debut album Pretty Mess in singer/guitarist Cameron Fraser's bedroom in 2004. With Tiffany Garrett Sotomayor on drums (also adding some guitar and vocals) and Charla McCutcheon on keys, Bella's '80s tinged synth-pop saw positive reviews roll in from the likes Exclaim! and The Province (Vancouver, BC). All the buzz caught Mint's attention, who enthusiastically signed them for the release of their sophomore album.

2007's No One Will Know featured contributions from Roddy Bottum and Will Schwartz (Imperial Teen) and Jason Martin (Starflyer 59), under the guiding eye of producer/mastermind Dave Carswell of JC/DC Studios (Tegan and Sara, New Pornographers). Their sparkling Mint Records debut channeled its influences from a synthier time, but in a gorgeous, non-ironic kind of way. Its dreamy girl-boy-girl vocals, synthy hooks, and punchy rhythms captured all those sweaty, carefree summer weekends practicing dance moves in your living room while wishing, hoping, and bouncing around for more.

Touring extensively in Canada and up and down the West Coast of the US, Bella's multi-talented members became known for their electrifying live shows, switching up their instruments and treating onlookers to spontaneous and wild dance parties. In their time, Bella shared the stage with bands such as The New Pornographers, The Breeders, Imperial Teen, The Most Serene Republic, Billy Bragg, Pretty Girls Make Graves, The Brunettes, The Organ, and Viva Voce.