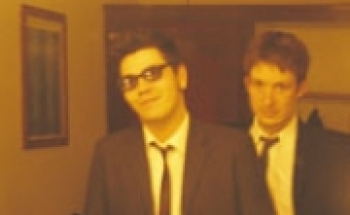 Duotang formed in Winnipeg in the summer of 1995, by two young gentlemen who shared a penchant for red wine on good days, and Labatt Blue on the rest. They also shared a great love for '60s bands such as The Who, The Beatles, The Kinks, and such. Early in the year, Rod Slaughter (later of Novillero) played bass and Sean Allum played drums in different bands. Late one night, they got together at the warehouse their respective band’s shared, and played '60s songs until dawn. No one else ever wanted to join in, so Rod became the singer.

Armed with a borrowed 8-track and locked inside the warehouse with friend Cam Loeppky, they proceeded to record a demo tape of original songs shortly thereafter. Their friends (Sinisa and Darcy) loved it, but no one else seemed to care.

One fall night in 1995, they played a festival in Winnipeg. A certain Mr. Peter Jenner (the infamous manager of Syd Barrett-era Pink Floyd, The Clash, and Billy Bragg) was in attendance. "These lads are pretty good," he was heard to say. Then things started to happen. A local show with the wonderful Smugglers that summer eventually led to them joining the Mint Records family in March of 1996.

Their first album Smash The Ships And Raise The Beams was recorded by Darryl Neudorf in Vancouver. It was released in September of 1996, and eventually climbed to #2 on the Canadian college radio charts. They toured Canada numerous times in support of the record, paired for months with cub and The Smugglers, and down through the States in early 1997. They made it to Europe with Huevos Rancheros in early 1998.

A second album The Cons And The Pros was recorded by Brendann McGuire in Toronto and released in May of 1998. This time around the duo rose to #1 on the Canadian college charts. That summer, Duotang toured Canada with The Weakerthans and Plumtree. Angus Kirkpatrick joined them on second bass for their next tour in the fall of 1998, during which they played with the Archers of Loaf in Toronto and Montreal. In the spring of 1999, they returned to Europe with The Hi-Fives for a fun-filled, six-week tour.

Their third album was released in June of 2001. Recorded at Private Ear Studios in the Exchange District in Winnipeg with lifelong friend and creative soulmate Cam Loeppky (The Weakerthans), The Bright Side was an upbeat affair that continued to demonstrate the duo's fascination with old school English bands like The Jam. Unlike previous efforts, the album's 14 tracks were recorded without having been stage-tested, indicating the increased confidence of Rod and Sean as songwriters and musicians. It became the band's second straight #1 album on the Canadian college charts.

Shortly after the release of The Bright Side, the band went on hiatus, due to the birth of Sean Allum’s daughter. However, a break-up was never officially announced, and in late 2014 the duo began sporadically performing again, so there is a bright side to look on.

"What fans and critics are certain to pick up on is The Bright Side’s distinction as the heaviest recording Duotang has put forth yet..." - Chuck Molgat, Exclaim!

"They deconstruct their hipster stereotype, while still punching out mod rock every bit as driving and on point as they ever have. Which in its own way is pretty hip. Tricky bastards." - Christopher Dare, Pitchfork