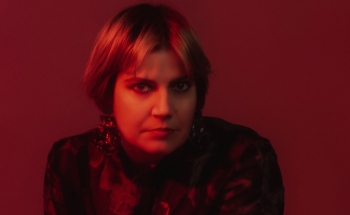 Kellarissa (Finnish for “in the basement”) is the solo moniker of Larissa Loyva, whose two-decade-long output of exacting pop music also includes her critically acclaimed collaborations with Nicholas Krgovich in the chamber pop band p:ano, synth pop duo Fake Tears, early pop-choir ingenues The Choir Practice, as well as stints as a touring member of How to Dress Well and Destroyer.

Voice Leading, Kellarissa’s fourth offering on Mint Records, is a vulnerable, self-realized ode to female desire, regret, shame, self-compassion and cautious healing. Austere lyrics and cerebral synth-pop turns, inflected with the savvy dance energy of nineties iconoclasts like Björk and Pulp, are interwoven with influences from modern literature, Euro disco, French nightclubs of the 80s, and Kellarissa’s own déjà vu. Voice Leading asks if it is possible to stay true to oneself in the cloud of desire, yearning for clarity when so many situations are painted with shades of grey.

Too Drunk To Be Afraid