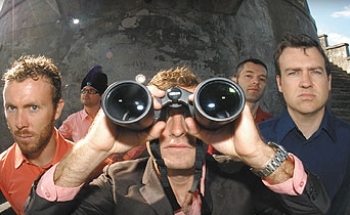 The Smugglers haven't performed a live show since Sunday May 23, 2004, in San Diego, California, the final gig of their ill-fated "Suntans Are For Winners" California tour. The band has never officially announced a break-up or a retirement, hence this bio remains in the present tense.

Welcome to the wild world of the Smugglers. Whether it be playing smoky clubs around the world, releasing countless slabs of hot wax on only the finest international indie labels, or churning out hilarity in their infamous on-line tour diaries, the Smugglers have but one goal: TO ENTERTAIN. From Vancouver, BC, Canada, The Smugglers are one of the longest lasting, most energized and entertaining bands to ever burst from their beloved frozen north. Forming back in 1988, Canada's greatest ambassadors of rock ‘n' roll music weren't supposed to make it out of their parents' basement, let alone into the twenty first century, but here they are, rockin' all over the world.

The Smugglers formed at Hillside Secondary School in West Vancouver, BC, Canada. Heavily under the influence of Black Label beer, hashish, and the raw rock 'n' roll sounds of the Sonics, the Cramps, and the Stones, the five teenagers were dubbed "The Smugglers" by their high school buddy Nardwuar The Human Serviette.

From their ugly beginnings in church basements, malls, and warehouses opening for heroes like the Gruesomes and NoMeansNo, the band slowly grew up to weld their influences of great punk and rock 'n' roll into a wildly energetic show all their own. The Smugglers took their sweat, suits, and boots on the road and, a decade and a half later, have toured to every pocket of North America, as well as sojourns into the uncharted wilds of Japan, Europe, Australia, New Zealand, and beyond.

The Smugglers live show is a legendary tour de force of energy and charisma, involving wild antics and audience participation with such now-beloved stunts as the dance contest (complete with a trophy to the winner - over 500 given out in more than twenty different countries), kissing contests, and Smugglers "dream dates".

Over the years, The Smugglers have amassed an incredible and hilarious collection of tell-all tour diaries, which are infamous with fans. The tour diaries are available for all to read unedited and uncensored on the Smugglers site, www.thesmugglers.com. One young fan once confessed to lead singer Grant Lawrence that the tour diaries "taught her everything" she knows about sex! Ouch!

Over their adventurous career, The Smugglers have bounced from label to label, always independent, including Vancouver's Nardwuar Records, Seattle's PopLlama Products, and Vancouver's Mint Records. From Mint, the Smugglers have licensed records around the world to such labels as Berkeley, California's Lookout Records, Tokyo's 1+2 Records, Australia's Corduroy Records, and Spain's Imposible Records. All tolled, the Smugglers have amassed a mighty eight full length albums and several singles, EPs, and compilation tracks worth of loud and snotty vinyl and CDs.

The Smugglers have always been lucky enough to work with great producers including Conrad Uno (At Marineland 1991, Atlanta Whiskey Flats 1992, In The Hall Of Fame 1993, Wet Pants Club 1994), Mass Giorgini (Selling The Sizzle 1996), and Kurt Bloch (Buddy Holly Convention 1997, Growing Up Smuggler 1998, Rosie 2000). Mutiny In Stereo (2004), The Smugglers latest record, was self-produced.

Life Outside The Smugglers: Yes, the fivesome do have lives beyond the world of matching outfits and on-stage backflips. Lead singer Grant Lawrence is the host of the CBC Radio 3 Podcast, one of the most popular music podcasts in the world. He also hosts daily on CBC Radio 3 Sirius Satellite Radio. Guitarist Nick Thomas is a geologist (ROCK!). Drummer Graham Watson is a designer and embroider in the "Hub City", Nanaimo, BC. Guitarist David Carswell co-owns JC/DC recording studios, which has produced bands like the New Pornographers, Tegan and Sara, and Destroyer. Bassist Beez was even once a co-owner of Mint Records.

Your Mom's The Devil