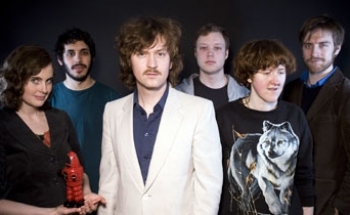 From the town that hatched such folk as Hot Hot Heat, Carolyn Mark, NoMeansNo, the Buttless Chaps, and others, Victoria BC's Immaculate Machine quickly built an audience following their Mint debut Ones And Zeros in 2005. Over the next five years, several Canadian and American tours would follow along with two more full lengths for Mint along with a handful of singles.

Inspired by sweat, dancing, love and political dissent, Immaculate Machine was a tight trio that sung in three-part harmonies and strangled shouts above crashing drums, catchy keyboards, and electric guitar. Rotating lead vocals and songwriting contributions from all three members resulted in a style that was hard to pin down. Growing up with grunge and punk, the group quickly developed an appetite for all types of music, new and old, although the trio had a particular appreciation for music that made political messages fun and accessible. Their energy and enjoyment of the music never failed to rub off on a crowd, and shows would frequently end up as frenetic dance parties!

Long-time friends Brooke Gallupe (vocals/guitar), Kathryn Calder (vocals/ keyboards), and Luke Kozlowski (vocals/drums) played in many bands together before settling on their three-piece lineup in October 2002. The trio independently released two albums, The View (EP 2003) and Transporter (LP 2004), both of which charted prominently on Canadian college radio, reaching #1 on both coasts. In the spring of 2005, Immaculate Machine became a Mint band, and began recording with JC/DC, the production team behind Tegan & Sara, the New Pornographers, Destroyer, Rodney Graham, The Softies, Young & Sexy, and others.

With Gallupe taking control of the songwriting, Immaculate Machine's final album, High On Jackson Hill, saw the trio grow to a six-piece and was recorded without veteran drummer Luke Kozlowski. Jackson Hill was released to critical acclaim in early 2009. Sadly, it would prove to be the group's final recordings and they disbanded shortly after its release.

I Only Love You For Your Car