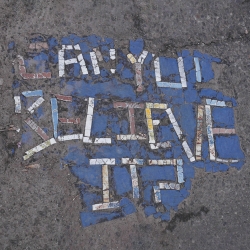 ‘My life: a slow clap progression, pace rising; to celebrate in the smallest finding - feels right to show admiration that grows,’ Mark Grundy begins on “Slow Clap”, the first track from Heaven For Real’s sophomore full-length Energy Bar, out September 16 on Mint Records.

Formed in 2012, and consisting of songwriter twins Mark and J. Scott Grundy (Quaker Parents) and their frequent collaborators, drummer Nathan Doucet and synth player/percussionist Cher Hann, the Toronto by way of Halifax project has been taking time to shape the follow-up to their 2016 Mint debut, Kill Your Memory. Springboarding from their early 2022 EP, Sweet Rose Green Winter Desk Top Tell This Side Autumn Of The Fighter Hot In A Cool Way, they describe the project as a “living collaboration”, one that strives to compress life’s truths into a distorted reflection of all of its facets. It’s this that drives Energy Bar–a hyper, trash-compacted mosaic of the band ten years in that’s simultaneously dreamlike and alive.