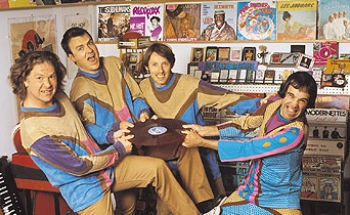 The Evaporators won't be taken seriously.

They slide down tables. They knock down speakers. They yowl and pound and thrash and... squeak. The Evaporators work hard for their funny. For well over ten years, The Evaporators have earned a reputation as one of Canada's most entertaining live bands, blending rollicking garage rock with some persistent onstage energy, side-spitting humour, and some very snazzy outfits. Their live shows are not simply concerts: they are raging, out of control parties that make the film Animal House resemble a church picnic. Led by the boundlessly enthusiastic Nardwuar the Human Serviette on vocals and organ, the shows also include an abundance of audience participation and spontaneous stunts that keep the crowd grinning from ear to ear.

Reportedly, The Evaporators formed while Nardwuar and drummer Scott Livingstone were in the midst of doing push-ups in their school gym class. Since then, the band's wacky humour and musical exuberance have consistently set them apart from the hordes of dour bands whose airtight sombreness constrict even the most jaded in society. Instead of taking on serious subjects, The Evaporators dodge them as if they were charging bulls.

Besides Nardwuar and Livingstone, The Evaporators feature guitarist David Carswell of The Smugglers, and bassist John Collins, also of The Smugglers and, more recently, the much-celebrated New Pornographers. In previous years, the band boasted members such as Lisa Marr, known for her involvement with the Lisa Marr Experiment and for her frontwoman status with now-defunct Vancouver luminaries cub.

Alongside this skilful group of musicians, Nardwuar boasts an impressive resumé of his own. In addition to his role in The Evaporators, Nardwuar runs his own record label and is best known for his status as gonzo journalist for the likes of MuchMusic and CiTR, the University of British Columbia's campus station. Nardwuar has subjected musicians, celebrities, and politicians, ranging from Pierre Trudeau to Marilyn Manson, to his distinctive interviewing techniques. Like his performances with The Evaporators, Nardwuar shows intense enthusiasm while conducting interviews, relaying a barrage of keen research and asking questions that can be amusing, insightful or even confrontational.

Nardwuar's unique journalistic skills can also be found in The Evaporators' work. Samples from his interviews with the likes of Tommy Lee, Jean Chrétien, Alice Cooper, and Dan Quayle are included as segments between the band's songs on their recordings. The I'm Going to France seven-inch single features one of Nardwuar's most notorious interviews, his brief encounter with Mikhail Gorbachev in 1993, during which he asked Gorbachev, "I was wondering... of all the political figures that Mr. Gorbachev has encountered... who has the biggest pants?" You might also remember Nardwuar as the guy that asked the question that Prime Minister Jean Chretien replied to with: "Pepper, I put it on my plate." Visit Nardwuar's extensive website at www.nardwuar.com for more info on his interviewing escapades.

While the band's antics may serve as the immediate source of attention, The Evaporator's music is equally deserving of interest. The group's sound draws on a variety of influences, demonstrating a strong comprehension of charged, unadorned rock 'n' roll. For the most part, their songs maintain sharp brevity, barely reaching over a minute in length. It's abrupt, floor-rumbling garage rock with Nardwuar's pitched yowl thrown in for good measure.

In addition to releasing a handful of seven-inch singles, The Evaporators have released a debut full-length, the entertaining United Empire Loyalists, and the irreverent I Gotta Rash, a split-LP with one of Nardwuar's other unhinged bands, Thee Goblins. Thee Goblins share The Evaporators' penchant for absurdity, donning sheets on their heads and wearing matching purple cheerleader uniforms.

For the most part, The Evaporators' style of humour-infused rock 'n' roll serves them, and audiences, quite well. During one wild performance, however, opening for indie rock superstars Pavement in 1994, Nardwuar narrowly escaped what could have been a slightly serious altercation. He departed from the stage in the middle of a song during The Evaporators' set and slid headfirst down a table, inadvertently upending several drinks. He only managed to avoid a royal prairie beating by swiftly promising to buy replacement drinks, placating the disgruntled liquor connoisseurs and ensuring the show continued without a hitch. Without fail, The Evaporators provide magnificently rowdy performances.

Surprise! Here's Ogopogo Punk by The Evaporators!
November 15, 2016
The Ridiculously Early Xmas Party Is Back!
November 17, 2013

I Can't Be Shaved

Nardwuar and The Evapora…
Photo by: William Jans
Download

Nardwuar and The Evapora…
Photo by: Rebecca Blissett
Download