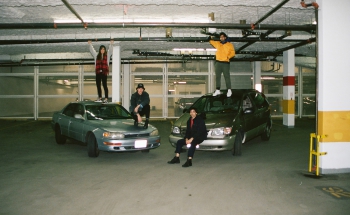 Less than a year since they signed to Mint Records for 2018’s Seeing Green, Dumb is already back with a new full-length, Club Nites -- this time with even more neuroticism and indignation.

Club Nites is a collection of narratives drawn from the nightlife ecosystem. The LP has the dry, in-your-face energy of a root canal: with crisp production that leaves every squeal of feedback and hollered refrain exposed. Dumb wrote and self-produced the LP in their studio over the course of a few months in early 2019, with mastering from Mikey Young (Eddy Current Suppression Ring, Total Control). Packing 14 tracks into a little more than half an hour, Dumb are unfailingly economical, with no-nonsense song structures that last just long enough to get stuck in your head.

The band makes no effort to compromise their pop sensibilities, disguise their guitar feedback (PC Worship, Pardoner), or hold back on austere rock riffs (Uranium Club). The product is a whirlwind of seemingly insoluble influences battling one another into existence. The inconsistency of vocal stylings range from spoken-word rambling, to Fugazi-esque chants, to what it might sound like if Mark E Smith had fronted The Zombies. The words are at times petty, concerning small-world matters in an attempt to break from overarching and more 'meaningful' concepts often displayed by tele-prompters. From being unable to meet the lofty expectations of your peers (Beef Hits) to showing disregard towards your closest friends (My Condolences), the album portrays a bleak social setting sensationalized by Hollywood and romance.

“Vancouver’s Dumb make loud, snotty, smartass indie rock with wirey guitars and buckets of attitude. It’s like a whole band made of Jimbos from The Simpsons and Eddie Haskels from Leave it to Beaver by way of Los Angeles 1980 new wave punk. (Except Canadian.) Their shouty, catchy songs rarely go past two minutes, but pack in maximum hooks and choruses.” - Brooklyn Vegan