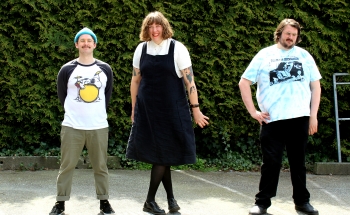 As they drift toward a decade of activity, Tough Age moves comfortably into a Tough Era. The band formed in Vancouver in late 2012, with songwriter Jarrett Evan Samson (formerly of Apollo Ghosts, Role Mach, and Korean Gut) infusing Flying Nun-inspired indie-pop with surf-rock subversions and hooks that stick like bubblegum. Joined by guitarist/vocalist Penny Clark, bassist Lauren Smith, and drummer Chris Martell, the quartet released their 2013 self-titled debut and 2015’s I Get The Feeling Central with beloved Vancouver indie label Mint Records.

Over the next two years, Tough Age’s core duo of Samson and Clark moved across the country to Toronto, reforming as a trio with drummer Jesse Locke. Inspired by the dynamic DIY minimalism of bands like The Clean, Minutemen, and Desperate Bicycles, the rewired Tough Age recorded their third album Shame in Montreal with producer Peter Woodford at his analog playhouse, the Bottle Garden Studio. They returned for 2020’s Which Way Am I?, exploring new musical territories of expansive guitar passages, airy flutes, and mesmerising motorik rhythms. Incisive, self-deprecating lyrics remained a constant, yet the deliberate vocals from both Clark and Samson emphasised the band’s dramatic evolution from the ramshackle, occasionally raging sound of their debut.

This brings us up to today. Tough Age has now returned to Vancouver, with Samson and Locke reuniting with original bassist Lauren Smith, who has spent recent years on the West Coast playing with groups such as Jock Tears, Cult Babies, and WUT. United by their shared experiences as hardworking musicians over the past decade–which has found Tough Age touring endlessly across North America, and twice in Japan–the trio have achieved a hard-earned cohesion, honing pop songwriting skills, powerhouse playing, and psychic connections that can only come from hundreds of hours spent together.

Mint Records has remained Tough Age’s label home for all four albums, alongside a slew of singles, and their 2015 tribute EP covering Cub’s Hot Dog Day in its entirety. Each of these releases includes the involvement of labelmate Jay Arner, whether acting as producer, mixing engineer, or tourmate from coast to coast. As the newly supercharged Tough Age write their fifth album, they are hitting stages with a fresh crop of new songs and reworked old favourites. With 10 years as a band behind them, the Tough Era is just getting started.

“Perfect guitar pop that feels like both a throwback to the very best of 80s/90s indie rock from The Bats to The Feelies — as well as a worthy successor to such a legacy.”
- Tiny Mix Tapes

“There’s a kind of honesty to the music, as if you can hear the band’s determination to not only change themselves, but to do justice to their many influences.”

“The way they expand on the ‘Pink Frost’ form-concept will make any Kiwi fanatic fill a drool cup in appreciation.”
- The Wire

My Life's A Joke & I'm Throwing It Away

I Waste Too Much Time On Myself