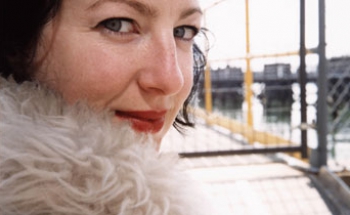 Some things are just meant to be. Birds are born to fly, politicians were born to lie, big fat guys with giant beards were born to ride their machines without getting hassled by the man, and Carolyn Mark was born to make music.

Ever since first taking to the stage as Templeton the rat in her elementary school's musical version of Charlotte's Web, show business has been the main driving force in Carolyn's life. In the early '90s, after coming to the obvious conclusion that musicians were much more fun to hang around with than actors, Carolyn formed her first band... all-girl surfy twang popsters, The Vinaigrettes. This was the beginning of a long love affair with music, musicians and the road that, even after 15+ years of crazy hard work, still puts the nitro in her funny car.

After the Vinaigrettes, Carolyn did brief stints in such bands as The Metronome Cowboys and The Fixin's before, in 2000, making her Mint Record debut with her first solo album, Party Girl. Since then, and with the help of a revolving cast of Can-Country super stars including, but not limited to, Tolan McNeil, Garth Johnson, Ford Pier, Nathan Tinkham, Corb Lund, NQ Arbuckle, Luke Doucet, Amy Honey, Greg MacDonald, Neko Case, and Carey Mercer, she has released many highly acclaimed albums.

As well, she has also travelled thousands of miles entertaining crowds of 4 to 4000... touring Canada, the United States, the UK, Norway, and Italy. She has shared the stage with such talented musicians as Jenny Whitely, Hank & Lily, Luther Wright, Sarah Harmer, Kelly Hogan, Lederhosen Lucil, Geoff Berner, Joel Plaskett, The Handsome Family, Neil Hamburger, JT and The Clouds, The Shiftless Rounders, NQ Arbuckle, Wanda Jackson, The Waco Brothers, The Sadies, and Blue Rodeo.

In October of 2009, Carolyn released a collaboration with NQ Arbuckle: Let's Just Stay Here. The album was received by some of her highest acclaim yet, garnering a Juno nomination for Roots & Traditional Album Of The Year and landing in the top 10 on PopMatters' Best Country Music of 2009 list. Of the album's 12 songs: 6 were originals by Carolyn Mark, 3 were originals by NQ Arbuckle, and remaining 3 were hand picked cover songs chosen for the important places they occupy in each musician's personal cosmology... or maybe just because they liked them. Co-conspirators for the album included The Kesper Twins, John Dinsmore (bass, wine glasses), Corb Lund (mandolin), Lily Fawn (musical saw), Jenny Whiteley (harmonies), and Miranda Mullholland (violin).

Ever the prolific songstress, she found time later on in 2009 to put together a special tour-only CD with her roommate Tolan McNeil. The Sound of the Tone - Echoes from the Last Resort featured a mix of eccentric new songs and bizarre answering machine messages. After strong sales on the road, that album subsequently became available through iTunes and the Mint Records website.

Carolyn's eight solo release for Mint, the cleverly titled The Queen Of Vancouver Island, arrived in fall 2012 and showcased her confident and collaborative, yet never too haughty, approach to songwriting.

"Carolyn Mark is a headstrong singer with wanderlust and critical-thinking skills that she exercises in songs that never settle for easy answers." - Dave Heaton, PopMatters

"Really there’s no roots-country chanteuse as engaging as Mark, whose well-intentioned banter is capable of making even the sourest puss at a show crack a smile." - Exclaim!

"Whether she lands on her feet, or ass-over-teakettle, Mark always sounds like she's having fun." - No Depression Magazine

The Sound of the Tone - Echoes from the Last Resort
MRD133 / December 15, 2009
Digital Purchase
Mint Store

The Pros and Cons of Collaboration
MRD075 / May 4, 2004
Digital Purchase
Mint Store

The Queen of Vancouver I…
Photo by: Ilijc Albanese
Download

Carolyn Mark and the NQ…
Photo by: Finn O'Hara
Download