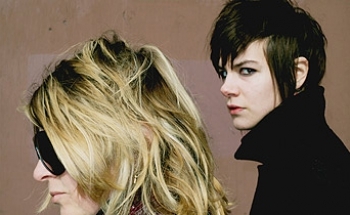 The Pack a.d. have been growing inexorably since they signed to Mint Records in 2008. Drummer Maya Miller and guitarist/vocalist Becky Black stormed off the mean streets of East Vancouver with their debut album Tintype in hand and Funeral Mixtape following shortly thereafter, both released by Mint that same year. Since then, the duo has unleashed their brand of tribal, punk infected garage-rock across North America and Europe. Mint released their third album we kill computers in 2010, which cemented their place at the forefront of Canadian independent music on the back of dozens of glowing reviews and a few award nominations. Showing no signs of slowing down, the band's fourth album Unpersons, produced by the infamous Jim Diamond (The Dirtbombs, The Paul Collins Beat, The White Stripes), hit shelves on September 13, 2011 to tremendous applause and extensive critical acclaim. 2013 saw the band move over to Nettwerk Records where they are currently touring in support of the blistering, just-released platter Do Not Engage.

"... the equivalent of a sonic knuckle sandwich — those girls are killer." - Alison Lang, Exclaim!

"you don’t need a bulging package to play the devil’s music. You do need balls, though. And drummer Maya Miller and guitarist-vocalist Becky Black are packing some pretty serious gonads—musically speaking, of course." - Sarah Rowland, The Georgia Straight

BC Is On Fire